Bremen possesses a great variety of interesting aspects, waiting to be discovered. We would like to provide you with information on a few initial ideas regarding the sights, as well as current events. Our employees are happy to give advice and support you on your adventure trip through the city. 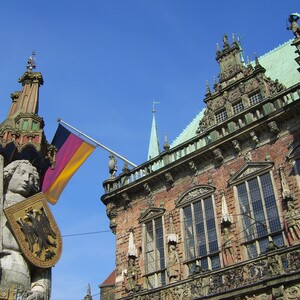 Just around the corner of the ATLANTIC Grand Hotel is Bremen’s market square, which is considered to be one of the most beautiful squares in Europe. Surrounded by numerous sights such as the cathedral, city hall, The Bremen Town Musicians and the Roland, Schütting and “Bürgerschaft” (legislative assembly of Bremen), the market square represents the heart of Bremen’s inner city. Back in the day, the active trading took place there – today it’s a place for a great variety of cultural events as well as the Christmas market and a the small Freimarkt (Free Trade Market).

Thanks to its elaborate architecture, the Böttcherstraße – located in the historic district and adjacent to the ATLANTIC Grand Hotel – is a cultural monument and one of the most frequently visited tourist attractions. Most of the buildings were built between 1922 and 1931 and mostly ascribable to Bremen’s coffee merchant and patron Ludwig Roselius (1874-1943). Roselius commissioned the sculptor, painter and architect Bernhard Hoetger (1874-1949) with the artistic design.

The Weser promenade “Schlachte”, with its variety of attractive, is located in the heart of Bremen, just a few minutes away from the ATLANTIC Grand Hotel Bremen. Going out to the Schlachte: a large number of terraces and beer gardens invite to sit back and relax. Try the typical Bremen beer, lift a Bavarian Mass (one litre of beer), have coffee and cake at land, on a ship or in one of the beer gardens! 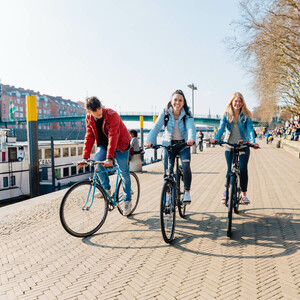 Experience a piece of Bremen's history by bike. Explore the waterways of Bremen, the hilly Geestland in the Bremen Switzerland and much more. In and around Bremen, you will find wonderful routes for relaxing bike tours but also routes for sports cyclists.

Through our reception you can rent a classic bike for 15.00 € - all are equipped with 7-speed gears.

Century-old buildings, tiny houses and twisted alleys – this is Schnoor. In the Schnoor quarter you can just stroll, because no cars are allowed in this area. This quarter owes its name to ship trading. The houses often were associated with professions or objects. There was an area in which cords and ropes were manufactured (Schnoor = cord) and a nearby area in which wire and anchor chains were made (Low German “Wiere”= wire), which explains where the street name “Lange Wieren” got its name from.

The origins can bed dated back to the 13th century. Today, the quarter, which has been restored with great attention to detail, housed a large number of restaurants, cafés and pubs, and also offers space for museums, galleries, artisan craft shops and theatres. 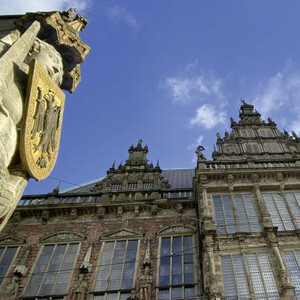 There are many highlights for the perfect short trip to the historical Hanseatic town Bremen. You can take a first virtual look to prepare for your next live-stay here: