Explore the beautiful region by the Baltic Sea

The seaside resort at the mouth of the River Trave is one of the most appealing holiday destinations in Germany. It has been owned by Lübeck since 1329 and has been a district of the Hanse town since 1913. Travemünde is famous far beyond Germany's borders thanks to its architecturally impressive seafront and broad sandy beach in the sheltered Bay of Lübeck - which is also a real haven for sailing and swimming enthusiasts.

For one week each July, Travemünde becomes an international mecca for watersports enthusiasts. The Travemünde Week is the second biggest sailing event in the world in which around 3,000 sailors in 800 boats are at the start of the regatta. The sporting event on the Baltic Sea is traditionally accompanied by a festival on land which attracts hundreds and thousands of visitors to Travemünde.

Travemünde also has plenty to offer outside the watersports season - numerous appealing boutiques, cafes and shops, for example, are perfect for a relaxing and enjoyable day out. On the Brodtener Ufer, visitors can walk along the impressive four kilometre long steep coast which is up to 20 m high and enjoy the panoramic view. In addition, the golf course, one of the oldest in Germany, offers the ideal conditions for an enjoyable round of golf in a maritime landscape.

Schleswig-Holstein has much more to offer than water, meadows, river banks and cows and particularly so around the ATLANTIC Grand Hotel Travemünde. Lübeck, the diverse cultural capital of the North, is perfect for in depth discovery tours and from here it is only 15 minutes by car to Travemünde. Here, in the hinterland of Travemünde, the Holstein Switzerland Nature Park offers many attractions in a beautiful lake and forest landscape.

During the past 20 years the land between the seas has made a name for itself far beyond Germany's borders particularly with the Schleswig-Holstein Musik Festival. Every year the festival, which was initiated by Justus Frantz and Leonard Bernstein, features almost two hundred concerts as well as music parties and kids music festivities. Whether during your summer holiday or in the quiet season, the Lübeck region impresses visitors with its varied and beautiful landscape and diverse sights. Many cultural, sporting as well as gourmet events also invite you to explore and have fun by the Baltic Sea. Discover the seaside resort of Travemünde and the surrounding area – Schleswig-Holstein's nicest spot!

Schleswig-Holstein has much more to offer than water, meadows, dykes and cows - and this is especially true around the ATLANTIC Grand Hotel Travemünde. Lübeck, the multifaceted cultural capital of the north, makes you want to go on extensive tours of discovery. It is about a 15 minutes drive from Travemünde. Here in the hinterland of Travemünde, lovely "Holstein Switzerland" captivates with its scenic charms.

Experience the fascination of Lübeck's landmark for yourself! Travemünde has one of the nicest sailing ships in the country - the four-masted barque "Passat".
The Hanseatic city of Lübeck salvaged the ship in 1959, gave it a fixed berth at the mouth of the River Trave and listed it as a cultural monument. Today, the 56 metre high masts of the museum ship are an emblem of Travemünde and are ideal for a day of exploring.

Located directly by the water, you can walk straight from the promenade to the jetty and towards the beacon on the pirates playground. Here children can enjoy swings, climbing frames, balancing beams, hammocks and many boxes on springs as well as for hiding in and for treasure hunts and all joined together with thick rope which is perfect for swinging and climbing fun. The big pirates ship offers new corners to explore for children of all ages.

The pirates playground is an approx. 5 minute walk away from the hotel. 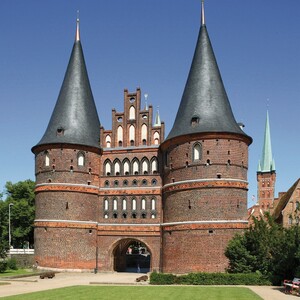 The cultural capital of the North:
Lübeck – home of the Hanse, the Buddenbrooks (family of famous German novel), Nobel Prize winner Thomas Mann (author of Buddenbrooks) and the "Seven Spires".

The Brodtener Ufer is a four kilometre long stretch of steep coast along the Bay of Lübeck at the northernmost end of the Travemünde seafront. It is characterised by its partly bizarrely shaped slopes and the most impressive cliff of the Schleswig-Holstein coast. There is a walking path above this which leads from Travemünde to the fishing port of Niendorf. The area here has varied landscape structures as well as many protected plant and animal species which makes it ideal for walks. On the western side you are accompanied by fields, meadows and forest on your walk and, on the east, by the sea and the Bay of Lübeck.

For your active holiday we can provide Nordic walking sticks free of charge or you can rent bikes for a small fee. Please contact our reservation team.

Welcome to one of the world's finest sailing regions! Whether with your own boat, a charter yacht or as a guest sailor - the Baltic Sea, which is right on the hotel's doorstep, offers the ideal conditions for many sailing trips.

The Alte Leuchtturm (the old lighthouse) in Travemünde is the oldest lighthouse in Germany and was mentioned in documents for the first time in 1330.

It is 31 metres high and now houses a maritime museum across eight floors which offers a fascinating insight into the history of light beacon technology. Also on display: models of lightships, various sea lanterns as well as old lighting systems from other lighthouses. Many photos with detailed information on the lightships, which belong to the Lübeck Waterways and Shipping Authority, hang on the walls.
More than 142 steps lead up to breezy heights and, on the top floor, you can marvel at the still fully functioning system of the Travemünde lighthouse with 1,000 watt lamps. The circumferential viewing platform also offers a unique view of the Skandinavienkai (ship terminal and the biggest in Lübeck) and Travemünde's old town across the Bay of Lübeck to Grömitz and the coast of Mecklenburg-Western Pomerania.

Golf with a sea view

As a guest of the ATLANTIC Grand Hotel Travemünde you can look forward to two particularly nice courses nearby:

By the Brodtener Ufer, high above the Baltic Sea, the unique Lübeck-Travemünde Golf Club with its 27 hole course, promises exceptional golfing pleasure. The club, established in 1921, is one of the oldest in Germany and the second oldest in Schleswig-Holstein. 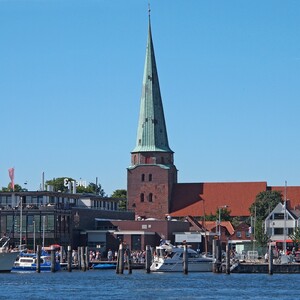 The maritime Travemünde offers a variety of experiences. Here you can get a first impression of the coastal city and discover many leisure opportunities for your next vacation: